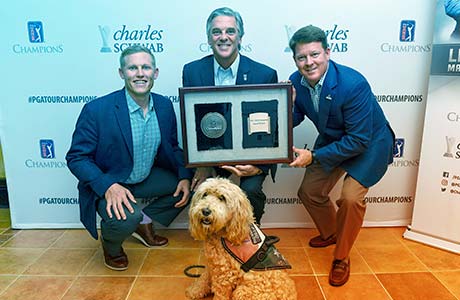 Coastal Mississippi – PGA TOUR Champions has selected retired Master Sergeant Kenneth Gestring of the Rapiscan Systems Classic in Biloxi, Mississippi, as its 2019 Volunteer of the Year. The announcement was made yesterday by PGA TOUR Champions President Miller Brady at the PGA TOUR’s annual tournament meetings in Ponte Vedra Beach, Florida.

“Master Sergeant Gestring has been paramount to PGA TOUR Champions in his volunteer efforts at the Rapiscan Systems Classic,” said PGA TOUR Champions President Miller Brady. “He has demonstrated leadership, selflessness and passion for the sport of golf in the Biloxi community, and is a true hero to the nation in which we live.”

Master Sergeant Gestring received the distinction via a balloting process that included nominations from every tournament stop on the 2019 schedule. In total, PGA TOUR Champions events enlist over 20,000 volunteers annually.

“Volunteers are the heart and soul of the Rapiscan Systems Classic,” said Tournament Director Stephen Schoettmer. “Master Sergeant Gestring is a dedicated member of our family that inspires everyone around him. We are very proud and honored that he has been chosen the 2019 Volunteer of the Year. It is an honor he has earned and richly deserves.”

Master Sergeant Gestring retired in November 2011 after serving nearly 26 years as a medic in the United States Air Force.

During his 2009-2010 deployment with a Provincial Reconstruction Team in support of Operation Enduring Freedom, his medical skills were tested when three Afghan National Police and 10 members of his Army/Air Force team were hit with a grenade. Although he was injured, Master Sergeant Gestring rendered life-saving treatment to the injured coalition force members.

In 2019, the Rapiscan Systems Classic continued a commitment to honor members of Homeland Security, First Responders, and active duty, reserve, guard, and retired U.S. Military personnel by offering exclusive access to the Patriots’ Pavilion. As a veteran, Master Sergeant Gestring took over as the Patriots’ Pavilion chairman to give back and serve those that are currently serving or retired from military service.

Shortly before the tournament, he was informed the Caddie Hospitality Chairman could not fulfill his duties. He immediately stepped up and volunteered to fill the additional position. This was not an easy task since the locations of the Patriots’ Pavilion and Caddie Hospitality Pavilion were not in close proximity on the golf course, and both chairman positions demanded numerous hours to ensure the success of the tournament.

Master Sergeant Gestring was ready for the challenge and flourished in both positions, exceeding all expectations in every task he was assigned or undertook. He was always first to the course each day ready to lead his team from the first tee shot until the last caddie departed on Sunday evening.

Finally, Master Sergeant Gestring organized and ran the 2019 Military Caddie Program. Under Ken’s leadership, the program provided over 30 military members the unique opportunity to caddie for a professional golfer during the pro-am.